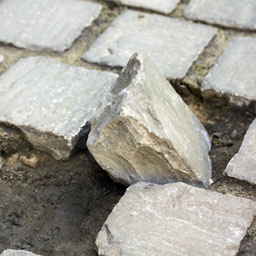 Jesus said to Peter, you are a stumbling block to me. You are setting your mind not on divine things but on human things.

When I was a child, part of me thought that Christianity was predominantly about being good. A kind of polite, helpful, doing the right thing sort of good, rather than those more challenging things which St Paul is asking of the Christians in Rome.

But perhaps if I’d had the words, I would have said even as a child, that the faith in which I was brought up involved much more mystery and paradox than just a calling to be a decent human being. There was something beyond articulation which I felt. Every time I stepped into this church, which I did from the age of six years old, I saw golden angels carrying candles, I heard music, I sang things which were poetic, and said things I didn’t quite understand. I saw Christ on a cross, I saw people kneel, I heard a long prayer being sung and silver chalices glinting on the altar. People went and held out their hands to receive both host and wine, murmuring language of blood and sacrifice. Bored even though I was on occasion, I spent time looking up at the vaulted ceiling and at the faces of people making their way back from the communion rail. Different kinds of beauty.

Outside of church, it was the same. A sense of a world and experience so much vaster than my own. I said my prayers with the spread of the evening sky outside my bedroom window. I gazed at stars and wondered about space. I lay on my front and smelt the earth and watched ladybirds climbing over the grass. It felt that I was part of something that was given, that I was cherished in a world which was also cherished. Being good and doing good, however important a part of faith, wasn’t somehow an adequate expression of what it was all about. As the writer Mark Vernon puts it, morality is perhaps best seen as the fruit rather than the root of our religion.

Sometimes it’s easier to say what something, like God or religion, is not than what it is, but I think there’s one thing I think we can emphatically say about the roots of Christianity. That it’s about life. And that this life, is not just of ourselves, our society and family, but a participation in the life of the divine. When will I ever learn to live in God? laments the singer Van Morrison. It’s not easy. Because it’s a life which involves death, many deaths perhaps of our illusions and self-centredness, deaths of fear and ways of seeing. Death itself. Stumbling blocks.

An illustration of wrestling with these stumbling blocks, albeit perhaps an extreme one, comes in a French film known in English as Of Gods and Men. You may have seen it. It tells the true story of a community of Trappist monks living in Algeria during the civil war in the late 90’s. They live among their Muslim neighbours, praying together, working the beautiful land and offering what they can to the community – one of the brothers is the local doctor. The Prior spends some of his time studying Islam and the community are regularly invited to share in local family celebrations. As the threat of terrorism and violence begins to deepen, they are told by the authorities that it would be best if they left. In fact, they feel almost pressurised to leave, though the Muslim villagers want them to stay. After a lot of soul searching and struggling with what to do, they decide to remain put, not because they seek a kind of martyrdom, but because they believe their life in God is in this place which they love, with these people who they love and with the vows they have made to each other. They have to overcome the stumbling block of fear, the temptation to be in control, or just do what they are told to do by the authorities. There are moving scenes in the film where one of the brothers in particular who is younger and understandably fearful, is taken through his own Gethsemane like suffering. In the end, their monastery is indeed raided and all of the brothers, except for two who manage to hide successfully, one because he is very small and can squeeze under a bed,(!) are taken hostage. In due course, they are found murdered. The exact circumstances of their death are still unknown.

The Prior of the community, Christian de Chergé, wrote a testament to be opened in case of his death. You can find it online by the way, and it contains powerful words about forgiveness and an unwillingness to judge. Indeed, the film ends with his testament which begins with this.

If it should happen one day – and it could be today – that I become a victim of the terrorism which now seems ready to engulf all the foreigners living in Algeria, I would like my community, my Church and my family to remember that my life was GIVEN to God and to this country. I ask them to accept the fact that the One Master of all life was not a stranger to this brutal departure.

The One Master of all Life. Christ.

A friend of mine who doesn’t go to church or really talk about religion has watched this film several times. He says he still can’t understand why they stayed. If you can understand why they stayed, you may have grasped what Christianity is predominantly about. The Master of all Life overcame the stumbling block of seeing things in only human terms – and invites us to do likewise.