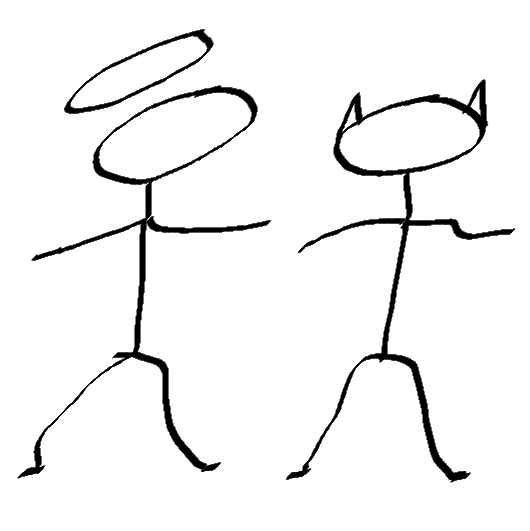 In the Gospel reading we heard the parable of the two sons.

The situation in the temple was extremely volatile, Jesus had just overturned all the profit-making stalls in the temple and now he had the audacity to stand up and preach to the crowds. To put it mildly, the chief priests and elders were annoyed. No doubt the profitability of the stalls was not limited to just the stall-holders. Added to this, he was being critical in the way that these leaders were interpreting and acting upon the scriptures, particularly in ways that contradicted the teachings of John the Baptist. Being leaders, these church officials considered themselves to be intellectually superior to the crowds. However, Jesus was able to meet them and defeat them on their own level. The question he asked put them into what we would now call a ‘Catch 22’ situation. If they refuted the baptisms by John, then they would face the wrath of the people who had all accepted John as a genuine prophet. If they said that they accepted his baptisms, then they would not be able to explain why they were deviating so much from John’s teachings. When the leaders were unable to answer his question, Jesus rubbed salt into the wound by recounting the parable. The first son in this parable was an analogy to those people who had been baptised by John and who, by accepting his teachings had changed their ways accordingly. These included some from the more despised positions in society. The second son was an analogy to the Church Officials, who wouldn’t deny John but failed to follow his interpretation of the gospels. The choice by leaders, of the one who did the will of his father, was the first brother, putting themselves, therefore, below the level of those despised prostitutes and tax-collectors.

The parable can also have some parallel with our current situation in the coronavirus pandemic. In place of the father (owner of the vineyard) we have an elected government – no… … this is not going to be a discussion on politics! Whichever Government in power, during this period, would have the same unenviable task of guiding our country through the onset and development of this terrible disease. Naturally, the recommendations and rules given to us will have been based upon unbiased scientific advice. The actions taken could not be perfect, because they also had to take into account the country’s economy. However, they would have been more appropriate than any that would have come from unsupported, personal opinions of those who could not be in possession of all the facts. In this particular analogy to the parable, the government represents the father (the owner of the vineyard). Who then represents two sons? There could be variations on this, but the first son could be represented by those who followed the government’s advice (however reluctant they may have been) and the second son, by those who refused to follow this advice and insisted on ‘doing their own thing.’ Our country is now suffering from a second spike, a stage that we had all hoped to avoid. It may be true that relaxation of the rules could have contributed to this, by upsetting the balance; however, the balance has been more seriously affected by an increase in the number of those who stopped following any rules (those who left the vineyard, so to speak).

Jesus compared the first son with many of those members of the public who were socially inferior to the Priests and Elders, these (after their conversion) would gain entry to God’s kingdom. No mention is made of the first brother changing his mind and leaving the vineyard, but the original parable was meant as a simple analogy with each brother representing a different group of people. When applying the parable to our present-day crisis, there is another more important difference. Those who do decide to ignore the rules will endanger many more lives, other than their own. This is where today’s reading from Philippian’s applies.

Do nothing from selfish ambition or conceit, but in humility regard others as better than yourselves. Let each of you look not to your own interests, but to the interests of others. – Philippians 2: 3 & 4

Over the ages there have been numerous world-spread pandemics and even more local epidemics: all claiming thousands, sometimes millions of lives. The most significant thing in all these cases, has been the way in which human beings have worked together to limit the infection and to look for a cure. Irrespective of race or belief, members of communities have worked together for the benefit of others, even when putting their own lives at risk. Whenever a new epidemic occurs, medical science, with the help of so many dedicated people makes terrific advances. Each new disease seems to increase in complexity in line with our own growth of knowledge, presenting much greater areas for research. As medical science advances so it has to cope with even greater advances in types of infection.

Fortunately, the very young appear to be more resistant to ‘Covid 19’ than adults (and those with certain health problems). Although many of us need to take extra care in avoiding serious infection, the future is looking brighter. We welcome the development of new vaccines for the present generation and in Addition we anticipate ‘herd immunity’ for the next. Meanwhile we must all work together in ways that we can. Advances in technology have made it possible for many more people to work from home, attend meetings and access church services. Although numbers attending the church have to be limited, this service can be accessed from a link on our website. It is shown on the internet for those at home who wish to join us in spirit. At 3.00pm there will also be access to an Evensong service with the choir (using ‘Zoom’), again the necessary information and links can be found on our website: https://www. stjamesmalden.org/