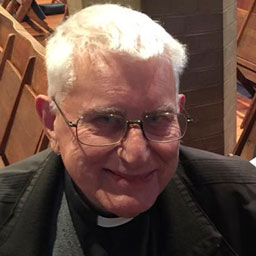 Almighty Father, you have given us your only Son to die for our sins and to rise again for our justification: grant us so to put away the leaven of malice and wickedness that we may always serve you in pureness of living and truth; through the merits of your Son Jesus Christ our Lord, who is alive and reigns with you in the unity of the Holy Spirit, one God, now and forever. Amen

How odd that this Sunday is referred to as Low Sunday. Believe me there is nothing low about it; the hallelujahs still re-echo around. Are you ready, JESUS IS RISEN – He is risen indeed!!! Easter is always an exclamation time.

The celebrations this year have had to be very different, The Archbishop of Canterbury celebrating the Eucharist on his kitchen table! St. James also celebrated, how good it was to see the work that had been put in to make candles or other decorations on the internet. Katie led us in our worship and we were not without music provided by Jason and his choristers.

It is usual today to talk about doubting Thomas who became joyful Thomas after his meeting with the risen Jesus. Not today. Instead let us think about Peter. He reminds me of a chap that I knew at school many years ago – of course. Whenever the teacher asked a question, there he was, arm brandishing urgently shouting, sir!, sir!. Peter was rather like that, always there with with an answer. He was often commended by Jesus and then he spoiled it and had to be rebuked.

Not this Peter. Here he is with the other disciples, again with a leadership role, in the very place where, only a few weeks before he had watched the Master that he had denied being crucified. Here we have a different picture, Peter is speaking in the·power of the Holy Spirit proclaiming that this same Jesus is risen from the dead. The abashed people ask ‘What shall we do’, and swiftly comes the reply ‘repent and be baptised.’ And we are told that 3,000 responded and were added to the church. Thus the begining of the movement which became the world wide Christian Church of which we are members.

It was some years later that Peter wrote his first letter to a group of Christians. He has lost none of his enthusiasm. ‘Blessed be the God and Father of our Lord Jesus Christ! By His great mercy he has given us a new birth, into a living hope through the resurrection of Jesus Christ from the dead.’ In this letter Peter then turns to more serious aspects of the Christian faith. The recipients are rejoicing . in their faith, but they do have a problem, Peter writes: ‘Even if now for a little while you have had to suffer various trials so that the genuineness of your faith is tested by fire.’ This is not the persecution which the early church experienced later, this is alienation and harassment by the majority non-Christian population.

The main purpose of the letter is a call to grow in the faith. Peter tells them that holiness is an essential for the Christian to aim for, it is the cornerstone of the Christian life. ‘As he who is holy has called you is holy, be holy yourselves in all your conduct.

Holiness is mutual love within the community. Love is the authenticating sign of a renewed life. In order to achieve such love the Christian must rid himself of ‘all malice and all guile, insincerity, envy and slander’ for these are things that destroy a community. Mutual love binds the community of the church.