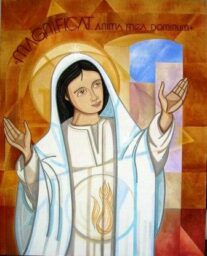 Sermon by Rev’d Sally Leeson for the fourth Sunday of Advent 2020.

“And Mary said, ‘My soul
proclaims the greatness of the Lord.'”

I have to confess that from time to time I put on a backing CD and have a good old sing to an empty sitting room. A bit of karaoke, I suppose, though you might not easily guess what I often end up singing. One thing I’m partial to is The Vagabond by Ralph Vaughan Williams. Not an obvious choice since it’s written with a male tramp in mind, but there’s something about the sense of freedom, walking the byways, embraced by the open countryside and sleeping under the stars which thoroughly appeals to me. At least, in good weather. It’s a kind of stepping into a song which is already there and making it my own.

And this stepping into songs is something many of us do in various contexts and for different reasons. The nuns who used to live in the convent by Ham Common, had in their folder of hymns the Beatles’ song Let it Be. Now whether this refers to Mary’s response to the angel, or is a reference to Paul McCartney’s own mother who happened to be called Mary, or whether the original was meant to be ‘brother Malcom’ comes to me’, well, it seems McCartney will not be drawn on this one. Maybe it’s a bit of good business sense to let the song appeal as widely as possible. But perhaps there’s also the insight that people step into songs which are bigger than themselves and whatever the original source of inspiration, adopt them for their own.

This usually means that they’re known pretty well or deeply loved. Sometimes the familiarity gives rise to people being a bit silly, so in my childhood, the carol The Angel Gabriel from Heaven Came was sufficiently well known that the words ‘Most highly favoured lady’ were changed to something else about gravy. Or the church community took what was probably dancing songs and changed the words to fit the Christmas message. Others still maintain an oral tradition of songs which are handed down. If any of you saw the repeat of Howard Goodall’s programme about Christmas carols, you would have seen a pub outside Sheffield jam packed with people singing carols that certainly I’ve never heard of, local songs passed down from generation to generation in the community. And they weren’t necessarily secular either, but men and women with pints in their hands, singing their heart out about how as the first nativity night was holy, so we too will keep it holy.

Today as we remember the Annunciation, the angel’s message to Mary, we’re also reminded that Mary has a song which is associated with her, the Magnificat. There are some ancient sources which suggest that it was originally Elizabeth who said these words, not Mary. In a sense it doesn’t matter because Mary is being given a song which has already been partly written, which she can step into. It echoes another hymn of praise which Hannah sang in the first book of Samuel on hearing that she too was to bear a child. It praises God for lifting up the lowly, of bringing life to those who feel most crushed or left out by it. The bows of the mighty are broken, but the feeble gird on strength. He raises up the poor from the dust, he lifts the needy from the ash heap. (1 Sam.2)

So cathedral choirs and congregations up and down the land have been able to sing The Magnificat for hundreds of years and not feel they are somehow treading on Mary’s toes, that it’s exclusively hers. Such songs are not copyright.

They’re not so much an individual’s outpouring but about what God wants for his people, about what God will do for his people. And that in this case one of the most important things is that all are included, particularly those who have been trodden down and forgotten. The voiceless, if you like. The ones Jesus went to. And this message reverberates from year to year, is sung over and over again. Is meant to be shared. A message telling out the greatness-the Magnificat- of the Lord by a young woman.

So many people have missed singing together this year. Were it not for the pandemic, I’m sure we’d be singing the hymn Tell out my Soul in this service, and the choir would have sung an anthem about Mary as we received communion. But even if our singing is limited to solos or family we can still listen, and maybe listen with more care to the words as well as the lovely music.

To think what particular hymns and carols we ourselves want to step into, and which of them say something about the implications of that Annunciation in Luke. There are so many- poems set to music, scripture set to music, theology set to music! Each year I’m drawn more and more to a hymn which was written way back in the fourth century. That’s only three hundred or so years into Christianity. Pretty ancient. And I’m drawn to it partly because I like the majestic, processional tune, but also the beautiful first line which is translated “Of the Father’s Heart Begotten”.

“Of the Father’s Heart Begotten.” or “Jesus is born out of the love of God.”

Today, as we think of Mary, and the words of the Magnificat, we remember that the heart of God also needed the heart and humility of Mary to begin our Christmas song.

And we might say that the heart of God needs our own singing hearts to bring the Christ child to birth in our world today.