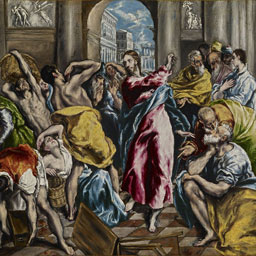 A sermon for the 3rd Sunday in Lent by Serena Josolyne.

The Purification of the Temple

In the name of the Father the Son and the Holy Spirit.

For obvious reasons the current restrictions have prevented me from travelling far from home, however, in less problematic times when visiting local churches in different towns, two particular things have saddened me. Firstly, seeing so many de-consecrated churches that have been converted to such places as Bingo halls and night Clubs. Sad though it is, it can be explained by the growing maintenance costs of many older churches. Also, with the smaller attendances, less churches are needed to cater for the needs of some areas.

I mentioned two things that saddened me, the second one is related in a way to today’s gospel reading, in which Jesus cleanses the temple by overturning tables and driving out market vendors. When I visited town churches that were still active, I was surprised to see how many of them had brought goods for sale into the main body of the church. It occurred to me that if I were to emulate Jesus by overturning all the tables and scattering the goods, it would quickly lead to my arrest. In fairness to these Churches, they were not setting up great market stalls, neither were they obstructing any places of worship, they were merely finding simple ways of raising money for basic upkeep and running costs.

Let us look more closely at today’s gospel. When Jesus entered the temple, he had seen many tables laid out with cattle, sheep and doves on sale, also a number of money changers. Although there may be some explanation for this, there was no excuse for the tables to have been placed in such a way that normal worship was impossible. The original construction of the Temple in Jerusalem had been a major project of Herod and once built, it had been left totally under the control of the Priests; the Romans would have had no intertest in it. The temple was divided into numbers of different courts, each court had a dedicated purpose with access permitted only to specified people. Only the priests were allowed access to the innermost court. Gentiles could access the outermost court, for worship, but they were not allowed any further into the temple. It was in this outer court for the Gentiles that the market had been set up, but at the expense of any who wanted to worship. Because the Jewish celebration of Passover was approaching, it was necessary to have sacrificial livestock available for sale locally. The currency of Roman coins was embossed with Pagan images and would not be acceptable within the temple, this explained the presence of the moneychangers. They could exchange the unacceptable Roman coins to a more acceptable currency, with an exchange rate beneficial to themselves. All this commerce would have been financially beneficial to the priests. But the priests knew better than to obstruct the worship of the Jews, this is why they arranged for the virtual market place to be set up only in the court of Gentiles. This great intrusion of stalls and tables would have made it impossible for the Gentiles to carry out proper worship in their court and they were not permitted to pass any further into the temple. This obstruction to the Gentiles’ worship is what had angered Jesus so much. His action of overturning tables and driving out the vendors and money changers would not have attracted any action from outside the temple, but it would have had a serious effect on any profits that the priests might have expected to receive from the traders.

Let me return to the present day. I‘ve already mentioned the financial difficulties suffered by many churches; however, the heads of the Anglican Church are also well aware that the needs of many individuals are becoming greater all the time. The current pandemic has made the situation even more critical. One of the greatest problems in our community is the absence of affordable housing, particularly for those receiving only modest earnings. As you may have read in the papers, authorities of the Anglican Church have taken note of this and Justin Welby, (the Archbishop of Canterbury) has recommended an investigation into how the Church can use 6000 acres of its land to provide affordable housing for those who need it. ‘The Commission of the Archbishops of Canterbury and York on Housing, Church and Community’ has already spent close to two years researching the housing crisis in England. This is a continuing process and more information about the ‘Coming-Home Report, can be accessed on the internet.

As we continue on our Lenten journey let us hope that we really can see light at the end of the tunnel and life will soon return to normal, with suitable relief for those who are currently in need of affordable housing.