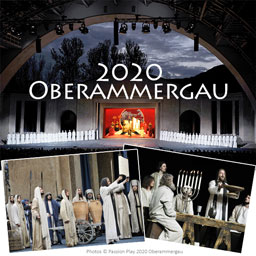 In the name of the Father the Son and the Holy Spirit.

Each year, as Easter approaches, I am reminded of a particular holiday that I took over twenty years ago with my husband Tony. We have had many holidays since then of course, but this was a particularly memorable one and it fulfilled one of the items on my bucket list! Although I’ve mentioned a connection with Easter, the actual holiday was in June, so I’ll come to the Easter connection shortly. The tour was organised by clergy of Southwark Cathedral. The holiday started with a base in St Wolfgang, Austria. From there we enjoyed a large choice of organised trips visiting many memorable places in Austria and Germany. The climax, the main purpose of the trip, was to come towards the end. We moved from our base in Austria to Garmisch-Partenkirchen (Germany), from there we had quick access to the town of Oberammergau. The highlight of this holiday was to attend a new millennium performance of the famous ‘Passion Play’, produced and acted by the people of Oberammergau. On the day before the performance, we were able to visit the town itself and spend some time there, meeting some of the actors working in their normal jobs. The whole of the following day was taken up watching an excellent performance of the Oberammergau Passion Play. Although it was basically an open-air theatre, we were fortunate in having seats that were under cover. It was raining that day, so those sitting in front of us and closer to the stage, were not so lucky. The play would be held rain or shine, so it didn’t cause any delay to the production. As its name implies, the Passion Play is a re-enactment based upon the Gospels’ description of Christ’s entry to Jerusalem on a colt/donkey (which we celebrate today as Palm Sunday), his ministry, continuing up to his arrest, followed by his trial, his crucifixion and finally, his resurrection. The performance also includes a number of relevant tableaux, each one depicting a different and significant occurrence described in the Old Testament.

Despite the remarkable and ongoing history of this event, all the performances of this ‘Passion Play’ for 2020 have been prohibited by the Garmisch-Partenkirchen District Administrators, following medical advice. However, they have been rescheduled to run again from May 21st 2022. In some ways the present-day circumstances are similar to those of Oberammergau back in 1663. At that time, Europe was being ravaged by the Black Death. This was the time-period of the thirty-year war and Bavaria was being ravaged by gangs of marauding soldiers, who were also speeding up the spread of the Black Death disease. At that time there was no medical science (as we now know it) and no such thing as a vaccination. However, even then, they did have some realisation that those suffering with ill-health could pass it on to others. By keeping strangers out of the village, Oberammergau managed to keep its residents free from the Black Death for some time, until one of its own townsfolk caught the infection (while away from home) and then returned home. This was enough to start a major epidemic in the town. This spread through the whole of their community, causing great consternation and loss of life. Believing the plague had been sent as punishment, by God, the residents, supported by the Church Council, vowed to God that if they could be delivered from this disease, they would perform a play every ten years, showing Christ’s suffering and death on the cross. After they had made this promise, it is said that in Oberammergau there were no further recorded deaths from this disease. In accordance with their vows, the townsfolk have continued to perform their ‘Passion Play’ every ten years (with very few exceptions), starting in 1634 and continuing to the present day. In 1678 it was postponed to 1680, so that it would be aligned to the start of each new decade.

Looking back to that year of 1664, the community of Oberammergau had taken what they considered to be the right course for saving their own community from the ravages of the Black Death. It was not just a vague promise that they had made, but a vow that they fulfilled by their actions from that time onward. The outcome from this early vow had developments that they could never have dreamt about. More than 350 years later, the ‘Passion Play’ at Oberammergau continues to be performed every ten years, (when possible). It has become world famous. It is an obvious attraction to Christians but owing to its background history and quality, its fame has spread far beyond any expectations. With the current availability of modern transport, visitors world-wide are able to rival those many courageous travels of St Paul while he was spreading the strong messages of Christianity from country to country.

Time has moved on; human knowledge has increased immensely since the time of the Black Death; but we have still suffered hardship and a great loss of life during the current pandemic. Some mistakes have been made, but we have also benefited greatly from the love, care and dedication shown by so many people, many of whom have disregarded the danger to their own lives. Jesus Christ gave us a new eleventh commandment of unconditional love to all. It is wonderful to realise how many people have been following this, by using their own knowledge and talents to give care and help to so many others. Caring about our own personal welfare and that of our own families is understandable, but world events have shown us how we need to extend our love and duty well beyond our own small circle. We may not be able to follow the dedication of St Paul or even the determined example set by the people of Oberammergau, but the effect every small piece of help that we give to others has can grow beyond all expectation.