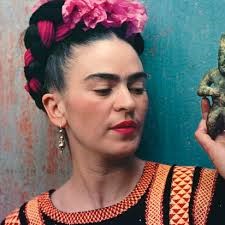 A sermon by Sandra Feltham

As we approach the beginning of Lent, some of us will be considering an answer to the question “What are you giving up for Lent ?” Many Christians see Lent as forty days of sacrificing something to show devotion and self-control, and maybe a little change.

Some people give up chocolate, cake or spending too much time on the internet! The point is to give up a vice, to avoid temptation, like Jesus did in the desert for forty days and forty nights before his ministry. During this difficult time some may feel we have given up enough and that the lockdowns and periods of isolation we are enduring during our current pandemic have been sufficient deprivation.

In Summer 2018, when we could still go out, I went on one of my frequent visits to the V&A Museum, to view an exhibition of one of my favourite artists “Frida Kahlo: Making Herself Up”. Those of you who know Frida, may think colourful Mexican artist, Marxist and wife of Diego Rivera, and you probably think unibrow.

Unusually this wasn’t just an exhibition of her art, but also a display of recently discovered personal effects which gave a fascinating insight into the artist herself and her creative process, and celebrated her incredible strength of character.

Maybe the link with Lent isn’t obvious but if we look at what she gave up in life, not just for forty days, and the resultant positive outcome, I think it might allow us all to think that often good things can come out of adversity.

From an early age, Frida was drawn to medicine, maybe due to contracting polio at the age of six, or maybe having a deeply enquiring mind and wanting to help others.

Whatever the reason, to encourage her, her father gave her the gift of a microscope when she was quite young and that microscope became her constant companion – taking it everywhere she could, so that she could examine everything in the minutest detail, maybe allowing her to see beyond the first impression of things.

Sadly, at age eighteen Frida was seriously injured when a tram crashed into the bus she was travelling on. This resulted in a piece of metal rail piercing Frida’s torso, breaking her spine and pelvis. She was extremely lucky to survive, but she would never be the same. As well as her physical trauma the accident meant that her dreams of becoming a doctor were also taken away from her. She spent the next three years recuperating from the accident…. and during this time she painted. These paintings reflected her suffering, loneliness and disappointment.

Even after her convalescence, Frida never completely recovered. In addition to the legacy of her childhood polio, which resulted in one leg shorter than the other, she had to wear corsets for the rest of her life because her spine was never strong enough to fully support her, but instead of letting the corsets define her, she defined them.

She painted the corsets with vivid designs. She incorporated them into her fashion. She even painted herself wearing corsets in several of her self-portraits. Once she painted on them; dressing them and painting them she transformed them into something that she could celebrate instead of hating; they were something that made her strong. They were part of her.

This is where I found a link not only with Lent but with especially Lent in 2021. I think it is a fantastic example of how we can celebrate the transformations which often come as a result of how we choose to respond to the things in life we are forced to change. How Frida transformed herself into the powerful artist who left impact on the world, and found positivity in adversity.

When we give up something voluntarily, maybe it’s not of as much value as we think. How much can forty days without chocolate or gossip or even Facebook really change a someone? However, how can embracing what we are forced to give up – the difficulties thrust upon us – change us for the better? Those that are unwelcome and unexpected, such as all the limitations that the current pandemic has thrust upon us?

Had Frida Kahlo not embraced what she was forced to give up the world would not have her art, passion, legacy of strength and optimism and hope.

Maybe we won’t all become artists like Frida, and no we cannot ignore the terrible difficulties, financial or otherwise, tragedies, loss and suffering that this horrible virus has wrought upon us. But it has given the natural world a chance to breathe easier with less pollution and it has given many people a chance to reflect on what is important in life.

That seems to be the point of Lent, not going without biscuits for a while but embracing the change forced upon us and using it to make us better people.

Allowing us to come out the other side, both of Lent and this incredibly difficult and shocking period in our lives, as our best selves.