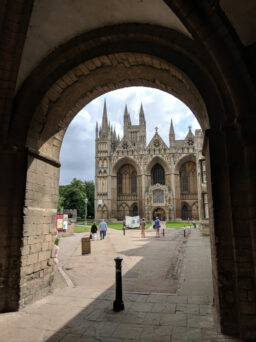 Imagine the scene. Drawn by the magnet of the first St James choir tour in 26 years, a happy band of pilgrims converges on Bodley Road, New Malden. Last minute pre-flight checks ensue. The tenors pump up their tyres. The basses locate newly laundered robes. And the junior members take their travel sickness medication. Eventually we all join the car park on the M25, later to delight in three circuits of the Peterborough one-way system trying to find the cunningly concealed entrance to the Travelodge.

Unpacked and refreshed, a motley collection of souls gathers in St John’s Parish Church in the main town square to start the tour proper. Our Director of Music, Jason Edge, shares his initial thoughts behind the ethos for the trip and how it is about much more than music and not just for the singers. Our Vicar, Katie Thomas, adds that the support act are not mere groupies but ‘professional listeners’ – a term which sticks for the duration of the tour. Mindful of an unusual opportunity to take a break from life’s normal relentless pace, we are looking forward to three days of contemplation and music on the themes of ‘God in the Wild, ‘God in Palaces’ and ‘God in His House’. Christopher Gower (previously organist of Peterborough Cathedral and father-in-law to Jason) is introduced along with his wife Sylvia. Christopher composed the anthem ‘Lord, we love the place’ which has inspired the title of the trip. The Gowers will be joining us for Evensong and will be present on the final night to hear this anthem sung by the choir.

We then enjoy an evening walking tour around the town in glorious sunshine led by the Edge entourage (imparting as past Peterborough residents much valuable local knowledge) and a sociable meal on the Piazza. Pilgrims are surprised and delighted to discover each other’s names. Like all good Anglicans we have of course been attending Sunday services for 25 years without feeling the need to venture beyond a smile or encouraging nod. Putting a face to a name is a triumph. Familiar faces are now firm friends.

A group of dedicated early risers makes it to 9am Eucharist at the Cathedral. The free coffee afterwards is just a coincidence. Thence to the Knights’ Chamber for what will become a customary morning meeting of the whole gang to begin our day in prayer, reflection and song. Jason speaks movingly about the experience of God in wild, extreme and remote places. Katie leads us in poetry, psalms and prayer. There is a full harmony rendition of Psalm 23 to close which we are all invited to join in – a special treat for the ‘professional listeners’ who can fool themselves into thinking they are temporarily fully frocked members.

The party divides: singers led by J. will rehearse for Evensong while the groupies led by K. depart post haste (the Met Office app is predicting an imminent thunderstorm) for Flag Fen – a Bronze Age site nearby. The necessity for speed prompts a Top Gear style race to the entrance – won resoundingly by the Vicar displaying creditable TV presenter driving skills. Arriving early she makes the mistake of paying full whack for all of us to go in. Does she not know that this is ‘Concessions on Tour’? Everyone except Katie and her daughter are in full possession of their Freedom Pass – we clearly look younger than our years. The kind man behind the counter gives a refund for the difference.

The only visible prehistoric wooden structure in Britain awaits us. The remains of an

ancient causeway, just the 3,300 years old, originally stretching half a mile across the swamp to link two disparate settlements. The platform which was situated at the midpoint was as large as Wembley stadium and used for religious rituals. We practise the ancient ritual of coffee and cake.

Back in Peterborough we spot the choir loitering guiltily outside yet another eaterie. A mild panic for some who suddenly realise it is now over 24 hours since they purchased their 24 hour car park tickets. Parking dues paid, the choir assembles in the cloisters for Evensong. Completely cassocked now and resplendent. A slick and professional pincer movement around the lower altar and they are installed (no pun intended). Someone clearly tipped off the town’s cognoscenti that a renowned Surrey choir would be leading the Rose responses this evening – as we are joined by a significant local band of supporters. The choir are jaw-droppingly good. The soaring notes of Psalm 135 and then the anthem ‘The King of Love my Shepherd is’ echo upwards to the ancient wooden ceiling high above us. A very special moment. The voices and music are effortlessly ethereal. On the return procession there is some hasty correction to ensure the agreed protocol for carrying your music – spine in the left or the right hand? But it’s a first world problem. The community moves swiftly onto pizza and (for some hardened revellers) the Pub.

The Pilgrim Pals regroup 10am sharp, this time at The Almoners’ Hall. Today’s theme is ‘God in Palaces’ and we spend time in small groups considering challenging artwork images. ‘Christ the Beggar’ is a particular favourite, prompting a feisty and radical discussion on how to deal with homelessness – an issue only too obvious on the streets of Peterborough.

should be pointers to our internal spiritual life. We are called to ‘look inside’ in every sense. Then prayers and the daily delight of our communal hymn. Today: All my hope on God is founded.

The pilgrim sub sects disperse for their separate daily schedules. Concessions on Tour struggle with a combination of sat navs, paper maps and Google phone images, which all conspire to land us magically at the totally inaccessible and padlocked back entrance to Burghley House, Stamford. A long driving tour of the perimeter wall before we encounter the vision of the majestic front edifice.  This glorious building was erected by William Cecil (First Minister to Queen Elizabeth I) in the 16th century – with gardens added by Capability Brown 200 years later. Interiors, paintings and artefacts are all stunningly impressive and the ‘Garden of Surprises’ is a delicious metaphor for the whole tour.

Evensong tonight is another thrill. Past parishioners, current clergy and choir parents all rally in the congregation for a memorable and transfixing performance of ‘I was glad’ (Parry). And so to Bill’s. Not an old friend of the Director of Music but the restaurant chain. Well. Let’s just say what happens in Bill’s stays in Bill’s. Suffice it to say that Prosecco may have been taken. The choir seem quite practised at enjoying themselves thoroughly. We emerge a very happy, bonded and relaxed band of chums.

The necessity to check out of the Travelodge early produces various vehicular shenanigans in order to stow luggage safely during the day. At one point an anonymous alto is witnessed briefly driving the wrong way up a one-way street. In her defence the arrows were significantly faded. As she hovers obligingly on a double yellow line to facilitate swift deposition of wheelie cases, she comes to the attention of Trevor, longest-standing member of the choir and invaluable factotum. Helpfully he performs an elaborate and very entertaining mime of a traffic warden placing a malicious and triumphant ticket under her windscreen wiper. Our drama group, the St James Players, have a lot to answer for.

Our morning service for the last day has the theme ‘God in His House’. Jason speaks

eloquently about how we are all a Temple of God and we need to invite Him in. The wordsmiths amongst us are enchanted to discover that Dox-ology means glory-saying. Katie asks us to reflect on the gratitude we feel for everything learned and experienced this week. Voices sound better together. We all sing individual notes but in combination they bring harmony. What voices do we need to hear when we return?  Which voices must we invite?  What space can we create that more voices might be heard?  Katie leads the ‘teaspoon’ prayers – such a useful mnemonic. Tsp. Thank you, sorry, please.

The singers sing. The listeners explore. This pilgrim writes. We reunite communally at 2pm for the official Cathedral tour. In two diverse groups we learn of a Saxon monastery first built in 654 AD. Destroyed by Vikings, restored by Normans and burned to the ground in 1100. Always a problem with wood. But reconstructed immediately to form the basis for the current stone structure. Highlights include the tombs of Katharine of Aragon and Mary Queen of Scots who both died nearby but were each so popular with the common people that it was politically too dangerous to bury them in London and Peterborough Cathedral was conveniently near at hand. Katherine is still there. Mary isn’t. When he became King of England, James I had her remains moved to Westminster Abbey under cover of darkness. After all she was his Mum.

Now a final farewell meeting for the collected tour community in the Knights’ Chamber. Early votes of thanks and giving of presents due to the need to depart pronto after the service. Particular mentions in despatches for the saint masquerading as the wife of our Director of Music (Catherine Edge) who appears to have been responsible for practically everything apart from leading the singing. Also Paul Griffiths our visiting Organist, the PCC for financial support and of course our Tour Leaders, Jason and Katie. The trip was Katie’s idea in the first place, originally floated at her interview to become our Vicar. The tour has been a resounding success, with music of an unbelievably high standard.

Overheard from a member of the Cathedral congregation: ‘Are you sure they’re just a Parish choir?’ The pinnacle of our subsequent Evensong service is Christopher Gower’s ‘Lord, we love the place’ – the anthem which inspired the theme of the trip.

‘Lord, we love the place where Your glory abides.’

For we too are that place.

May we carry Your glory forward to share with others.

As the gift of this tour continues.