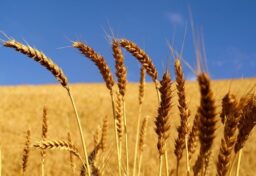 Click here to view the recording of the Facebook Live Stream of this service which featured Jane Wilkinson (Soprano) singing “Be thou my Vision”, “Laudate Dominum”, and “The Lord bless you and keep you” accompanied by Jason Edge (Organ).

Our grateful thanks to Jane and Jason for the wonderful gift of music in this service.

Click here for our activity sheet for children and families.

The Parable of the Weeds – Matthew 13 – Mutual Flourishing?

Last week we had different soils; this week different plants – the wheat and the weeds.

Today’s parable has two opposites growing in the same field.

Parables are meant to provoke and challenge and this one – only found in Matthew – really doesn’t hold back in its job.

I’m sure we have all experienced a situation where we have had to live with, or work with someone so opposite to us that we might think of them as a weed. People who – if we were really honest – we might prefer were not there.

In the Church of England this week there have been debates again involving those who can not accept the ordination of women and those who can – it has provided a sort of lens for me as I prepare this sermon. Two opposite groups growing in the same field.

And each finding the presence of the other very hard at times. Both – if we are very honest – sometimes longing to remove the other.

But here is where the parable starts to provoke and challenge.

The point isn’t who is the weed and who is the wheat – as much fun as we can all have with that – who doesn’t like to pretend they are they are the Simon Cowell of the spiritual world – ready to judge everyone who comes before us? No, this parable reminds us that is for God alone to decide – instead the point is how do we create a situation so that it no longer feels like we need to uproot the other in order to survive ourselves? How do we grow this way – how do we mutually flourish? And this applies not just to the church but to our lives – to everywhere and everytime we find ourselves itching to kick someone out the field of our lives just for not being just like us.

And the first thing we need to note is that things are not as binary as we might first suspect. Weeds are not all bad.

The definition of a weed is a “wild flower which grows where it is not wanted” and the famous essayist Emerson said “what is a weed but a plant whose virtues have not been discovered?”

And weeds and wheat can be remarkably similar – this particular weed looks almost identical to wheat – needing a microscope to tell the difference – until just a week before final maturity and the time for harvest comes. And then the wheat has a sudden growth spurt and becomes all it should be – and much, much bigger and fuller than the weed – making it easy to tell the two apart – and for the farmer to separate them.

You see the beginning and end are easy – sowing and harvest – when it is clear what is to be done – who is right and who is wrong. But it is the middle bit that is hard. And that is the place we live. Right in the middle of time – in the hard place. We live in the middle where good and evil – wheat and weeds – co-exist. And we can’t always tell the difference.

So what does the parable say we should do? Well, it says, we need to hang in there – grow – focus on becoming all you we were created to be – focus on being fruitful – because if we put all our energy into just trying to pull up the weeds we’ll pull up goodness right with it – the roots of both are entwined. Our job is not to be the farmer who decides when harvest takes place – or even to say what grows in the field. We have one task only – to grow the best we can – and to allow others to grow and flourish too.

And the really odd truth is that weeds can help plants grow.

Weeds do two things in particular which is useful for crops – first weeds can protect the top soil from erosion whilst simultaneously breaking up the lower soil below enabling plants to grow much deeper roots than they would have on their own. Weeds can give you a stronger crop.

And second weeds are great indicators of the soils health and quality – as far back as Pliny in the time of Jesus – weeds were the guide and test of how crops would grow. The weeds – if we pay the right attention to them tell us things about the environment that we might otherwise miss.

So it is a risk to destroy them or remove them.

And not least because just like last week – rarely do we get to play just one part in the parable – we all have the capacity to be both wheat and weed – and good and evil exist in us all – and a proper campaign to rid the world of every weed would leave the world with nothing but bare soil and scorched earth.

Which is exactly what the Devil would like – as Robert Farrar Capon says in his commentary this is the entire purpose of the Enemy planting the seeds – Satan – having no real power over goodness – simply sprinkles around a generous helping of darkness and waits for the children of light to get flustered enough to do his job for him. There is nothing he wants more than for the weeds to upset us.

Because if we spend our time and effort focused on the wrong thing – being bothered by the weeds, pulling up the weeds, wanting to grow away from the weeds – instead of putting down deep roots and growing into all we should be – then there is no limit to the evil which can follow.

And the parable says we must resist. We must remember we are called to be wheat. And more than that.

The parable says we are to ‘Aphete’ the weeds – and this is a remarkable Greek word meaning to let alone, to permit, to forgive and to suffer alongside – and let both grow together and flourish together.

Leaving all judgement to God at the appointed time because we don’t always have an eternal view open to us.

Take this story as an example – and you judge wheat or weed.

Teenage boy who was smart but very rebellious, he didn’t listen to his mother, in fact he made fun of her.

He moved in with a girl whilst still a teenager and got her pregnant as he sought popularity and recognition. After living with her girl for 15 years he dumped her and moved in with another. He became engaged to this second woman, thinking it would advance his career. The engagement was a long one, two years, and during the engagement he hooked up with a 3rd woman. In the midst of this, he left the church he was brought up in by his mother and joined a cult. Eventually he became bored with the cult and he became a sceptic.

Big stinking weed with fungus on I reckon.

But his name is Augustine of Hippo, named after a place in North Africa, which was a Roman colony. Augustine of Hippo would later be called St. Augustine, one of the most important theologians and church leaders of the first 500 years of church history. His mother is St. Monica, and St. Augustine wrote a tell-all autobiography called “Confessions” which is widely seen as the first Western Christian autobiography ever written and is the most complete record of any single person from the 4th and 5th centuries. It is also the story of how a stinky weed becomes one of the finest wheat stalks in the field.

Because judgment comes through the cross – if we will submit to it and let grace work through us it always transforms. And the worst weeds can become the greatest saints. There is hope for us all in the field of God – if we just keep on growing – sending our own roots deeper without disturbing the ground of another.

Only God has the eternal view – and the harvest will come in when he is ready.