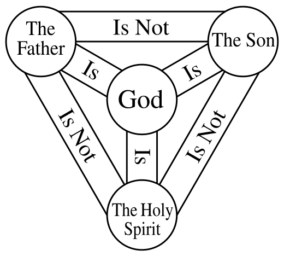 If you would like to join Mother Katie for the live-streamed Eucharist on 7th June at 10:30am please follow this link for details.

Holy God, faithful and unchanging: enlarge our minds with the knowledge of your truth, and draw us more deeply into the mystery of your love, that we may truly worship you, Father, Son and Holy Spirit, one God, now and for ever.

Acts and the Holy Trinity – by Father Clive

I was about to write out my last piece on Acts when Mother Katie asked if I would compose a Sermon for Trinity Sunday. So it gave me the chance to look at both in relation to what we might have gained from the readings I suggested.

In the Missionary Journeys as recorded in the Book of Acts we see how the disciples and early members of the ‘Church’ moved out beyond the confines of Palestine to the area of the Mediterranean with Paul finally arriving in Rome itself. The early members were basically all Jews and chapter 13 is indeed a turning point when Paul himself declares in verses 46 and 47

‘It was necessary that the word of God should be spoken first to you but since you reject it and do not consider yourselves worthy of eternal life, we will leave you and go to the Gentiles. For this is the commandment that the Lord has given us – “I have made you a light for the Gentiles so that all the world may be saved” ‘

This reminds us of the Peter and Cornelius episode and is a real turning point and this was confirmed by the Council in Jerusalem hence the great Missionary journeys. Thus this new ‘faith’ brought together many Jews and Gentiles into one brotherly movement. That did not mean that hostility did not continue and the early Church was to suffer persecution not only from the Jewish community who refused the message but also the Roman authorities as we all know. That persecution has continued even to today in many areas and throughout the history of the Christian Church we have even turned on each other as groups broke away believing that the Church itself had fallen away from the basic teachings of Christ. Our own history is not necessarily a proud one when we read of the Inquisition and the actions of some Christian groups in the lands of our later Empire. But we are no different to any other religious faith or indeed political group and even sometimes a family group.

That is the reality of human history but it does seem to me that finally Christianity has become more united though having different positions on certain aspects of the faith. All this for us started with what we have read in Acts.

Starting from a position of fear, indecision, isolation and wondering, the small band of Our Lord’s disciples changed into the founding fathers of our faith starting from where we did our reading of Acts in Chapter two…..The Day of Pentecost.

Now we have arrived at Trinity Sunday……so of what importance do I see in this. Well I believe that it is the celebration of our understanding of all that has gone before. This may sound rather simple to you but let us just recall what we have been reading……it is in itself the realisation that the wholeness of our faith is in fact a Trinity… Father, Son and Holy Spirit.

It is our Father who created the world and all that is within it. This need not be in opposition to evolution either for it is amazing how the story of creation, written all those years ago actually agrees with the stages of evolution. It is only that to the earliest writers had very limited understanding of time to days and years….. and this belief is still used from those times in some sayings we have today. 40 is a particular case. I have always believed the theory of evolution in no way denies our belief in Creation and it is our Father who created it all and how it happened worries me not at all. It is our Father to whom all things owe their being and it has been that Father (God) whom people denied throughout the centuries in one way or another. We read of this in the Old Testament how He brought his people from Haran to Canaan, how He sent prophets each time we strayed and I have no problems with other stories for they are seen from a certain prospective which does not mean that in some way they did not happen. Then in the end He sent His own son whom the people (some) also rejected. But His Son laid down his OWN life that we ‘might have life’ with words ‘Father forgive them for they know not what they do’ – words we hear on many occasions throughout the history of the Church.

Now that could have been the end except for the small frightened band we have just read about and the event of Pentecost…….the rest, as they say ‘is history’. And that history has been incredible for despite all that has been set against us and still is we remain strong. Now you may think that this idea rather naïve but then our beliefs need not be complicated…it is only us that make the doubts and complications. The times we read the two simple words uttered by so many from Christ himself down through the ages ‘only believe’. This is why I think that Trinity Sunday is so important…….not just another date to fill in a calendar but a realisation that everything we believe comes from that Trinity……
that is how we end every service and that is how I shall end this sermon.

Throughout these past few weeks we have witnessed the best and the worst in people, we have suffered tragedy and seen miracles….that is and has always been life – life for all – for we are no different, better or worse than other people except through faith and therefore we experience life as they do but we as a group and individuals can ‘only believe’ through that faith otherwise what is our belief worth. It may not be easy at times but I am sure that it is true for we have the promise of eternal life through the Trinity we are celebrating today. The history of the Christian faith came and comes from The Father, The Son and The Holy Spirit…the God-Teacher-Power….changing us totally.

And this is what we have been studying and continue to do so.

May the Blessing of God almighty, the Father, Son and Holy Spirit be with us all.

As we begin to come out of lockdown let us once again thank God for all He has given us in faith and friendship. Despite everything this is a wonderful world and as I have said all along ‘we’ll meet again!’

Love to you all.