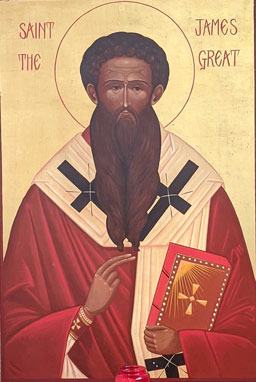 Our thanks to Maria for playing the organ at this service.

Click here for our activity sheet for children and families.

Merciful God, whose holy apostle Saint James, leaving his father and all that he had, was obedient to the calling of your son Jesus Christ and followed him even to death: help us, forsaking the false attractions of the world, to be ready at all times to answer your call without delay; through Jesus Christ your Son our Lord, who is alive and reigns with you, in the unity of the Holy Spirit, one God, now and for ever.

How joyful it is today to celebrate the feast of St. James, who is of course our patron saint. One of the apostles of Jesus and the brother of John, whose spiritual influence is behind the fourth Gospel, three letters and of course the Revelation. It is also an opportunity to celebrate our Church which over seventy years has been a source of spiritual strength and comfort for so many people, some we remember, many we don’t, but they all received nourishment at the altar here.

James and John who were nicknamed ‘sons of Thunder’ by Jesus because they wanted to call down fire from heaven on a group of people who rejected their Master. There was also the incident when either they or their mother asked Jesus to give them important positions in His Kingdom. Nevertheless they were part of the intimate group of apostles who Jesus took with him at his transfiguration.

James was the first of the apostles to be martyred, when Herod Antipas wanted to please his people. But the story doesn’t end there because a legend arose in the ninth century which made him the apostle of Spain and its patron saint, pointing particularly to Compostella. This place became one of the favoured places to go on pilgrimage and remains so today. Many people from our church have done so.

Our information about how the Christian Church developed and grew is rather hazy. Of course we do have the Acts of the Apostles, which is said to contain the history of the early church. In the Acts we do see some of the ministry of apostles like Peter and John; Philip is there too, of the others there is silence. Luke is much concerned with the work of St. Paul as he travelled and ministered to the churches, especially of Asia. The one thing we do know is that the Christian Church grew rapidly, responding to the message of Jesus Christ, crucified and risen. So how did they hear? There is evidence to suggest that one of main reasons for the development of the Church is what might be called ‘gossiping the Gospel’. That is, men and women who came to Christ did so because of the enthusiasm of other Christians.

So as we commemorate St. James, our patron, we must also be grateful to those many unnamed Christians whose witness spread the Gospel. And today, we are also recalling all those who, over the years have worshipped and witnessed at St. James. If there is one thing which we must be aware of in these challenging times it is the need for the Gospel of Christ. The church seems to prosper most when its faith is challenged. We are the ones to whom the challenge is given, to deepen our own faith and to show Christ to others.