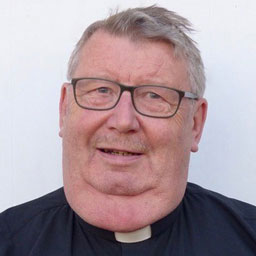 The experience changed my life

In 2021 the former Beverley School, now Coombe Boys School, celebrates its ninetieth anniversary. It has served the community of New Malden in many ways during that time and I had the privilege of being a schoolmaster there from 1969 to 2005. Here are some of my memories as Head of Religious Education and the wonderful life the school has given me.

Originally I was only going to be at Beverley for one year, but the Headmaster Mr. Clifford Fisher was an inspirational Head, and I enjoyed a fantastic career for the vast majority of my time there. He allowed me to introduce R.E. in a completely different way and to get the students involved within the community. His support was invaluable.

In the first term I was asked to arrange the annual Carol Service at Saint James Church and had to meet the Vicar Rev. Francis Butcher. Although not an Anglican I found in Francis another person who greatly influenced me and within months I was appointed a Reader within the Church, and that brought the Church and School into a partnership. I was also involved with Cancer Relief as it was then and gradually that became the major school charity which has lasted to this day.

Within the R.E. Department we introduced project work and stimulated discussion to encourage the students to form their own ideas. Gradually I got to know many of the parents well, and from the middle 1970’s they made up the Cancer Relief Committee. In fact we opened the first Cancer Information Table in the Reception in the early 80’s. A student Committee was also founded.

The Department organised February Half Term trips to the beautiful village of Kandersteg in Switzerland by train and eventually these were opened for parents of the school, members of Saint James and Cancer Relief. They operated from 1973 to the late 1980’s.

After their Summer exams some fifth form students could join a trip for five days, staying at the beautifully sited Denstone College in Staffordshire, walking and meditating on The Prayer of St. Francis and enjoying the swimming pool and excursions thanks to the school having a Crew bus.

Of course under Clifford the school was noted for its sporting successes in so many areas including rowing, fencing, rugby to name but a few.

Within lessons in the senior years we had many speakers coming to talk to the boys about social and religious matters and various religious groups. A Christian Union run by the students was formed and the Founders Days Services were held at Saint James. Each year the Department organised an Exhibition on a topic taken from the RE syllabus: 1972 was Tutankhamun; 1973 Roman Empire; 1974 Indians of the Americas;1975 Medieval Britain; and in 1977 Royal Households of Europe to celebrate the Silver Jubilee of Queen Elizabeth II. Between 1,500 and 2,000 people visited each of the exhibitions and many firms supplied display items and in 1977 there were so many items from various royal households that we had to have people staying overnight for security.

From 1974-77 all the building work was carried out by the PSA Chairman Mr. Peter Feltham. We even had a complete replica set of the Crown Jewels.

In 1973 we also started theme parties, and these continued until 2016 with students acting as waiters in costumes. These were open for the School Staff, parents, members of Saint James and Cancer Relief Friends. Some took place in Church Halls or the school sports hall where on one occasion we had 250 plus to one of our Bavarian Beer evenings.

Later some took place in historical locations. The Imperial Russian night at Chiswick House where we were dressed in some of the costumes from the film Nicholas and Alexandra, the Imperial Viennese Night at Headley Court where we borrowed the Dress Uniform of the Governor of the Tower of London and many many more.

We also organised year trips to the Manor House Hotel on Dartmoor for the parents etc. Having been priested in 1997 I became Hon. Chaplain to the School following the departure of Rev. Slattery.

In 1996 a Cancer Information Suite and chapel was constructed in one of the Department’s Huts accommodation on the school field by parents and senior students and later this was transferred to a site in the playground. This was officially opened by the Mayor and the MP for Kingston upon Thames, Edward Davey. Finally in 2010, with a school rebuild, a purpose built place was sited just inside the school main gate and in the year 2019 it had 120 footfalls in one year on the opening days of Thursday each week or by appointment at other times.

I also had the privilege of organising the fourth year two week Work Experience for four years, and became the school Community and Industry Links co-ordinator organising, through the Midland Bank, a student run school bank and a discount card for local shops including MacDonalds, which was well used.

We also established the position of a R.E. Dept. Prefect, a position held annually by a senior student who was part of the Cancer Relief Junior Committee.

I left Beverley in 2005 since the education system had changed drastically for my subject, but the Cancer Suite continues to this day and I have close contacts with the school, many ex-parents and former students and staff.

I consider I was very, very fortunate to have taken that post for one year, because it changed the whole of my life both within the school and the community. I learnt so much from the young men and later women that I was supposedly teaching, and made many lifelong friendships. In fact all the members of the Malden McMillian Committee are former parents of Beverley students, and all bar one have served this charity committee for over 45 years each.

It is now Coombe Boys School and has progressed in leaps and bounds, firstly under the leadership of Carol Campbell from Coombe Girls, then Deebie Walls and now David Smith.

I value greatly my continued association with such a wonderful educational establishment which gives the students a fully rounded education and start in life. With great facilities it Is an ideal school for any young man.