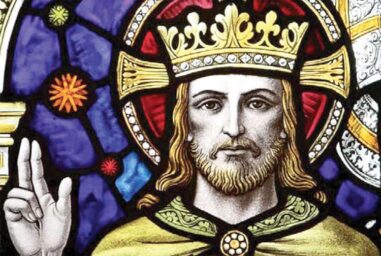 Sermon for the last Sunday before Advent

Just before we start Advent and that run up to Christmas – today in our church calendar we are being reminded that how the story ends is every bit as important as how it begins.

It is the feast of Christ the King – right at the end of the liturgical year – when we remember the final chapter. That Jesus as King and the gift of eternal life is with him alone.

Not an ending you might expect from the beginning of story.

Because the beginning of Jesus’s life might tempt you to think he is no one important. He was the illegitimate child of a poor peasant girl, born in a cold stable amongst the animal muck and dirt, he quickly became a refugee child seeking safety in an alien land. He grew up to become a homeless and wandering preacher – we are told he hung around with gluttons, drunkards and prostitutes – that he healed the sick and fed the poor. The crowds loved him to begin with – and many flocked to be with him. But then the crowds turned against him, as crowds often do. The religious authorities totally misjudged him and plotted to kill him. Jesus’s life ended in his early thirties – when – after being betrayed, rejected and tortured – he was nailed to a cross with criminals – abandoned by his friends – and left to die.

First impressions might lead you to believe that he was a failed Messiah at best – a good man, an interesting man, but not an important figure on the world stage – certainly not King of All Ages.

But Jesus offers us a Kingship like no other – a vision of power that remains as compelling and dangerously subversive 2,000 years on as it was first on those dusty streets of Bethlehem when Kings from afar came to see a baby in a stable.

And that is at the heart of our Gospel today.

To recognise God our King – to serve God our King – to participate fully in his reign – we need, like the Kings in the Christmas story to know where to find him – and it won’t be the palace – or any of the places of power we might be drawn to.

It will be in the places and people we might find it most easy dismiss. Because this is always where the God story begins.

And to find ourselves within it we need to go to those places too.

For the past few weeks we’ve had passages that challenge us – are we ready if Jesus the King returned? In other words would we be found in that story? Today we have the passage that shows us what it will be like when he does return and we are sorted into the sheep and the goats – those who found themselves in the story and those who wrote themselves out.

Sheep and goats in the Middle East look surprisingly similar – a bit like the wheat and the tares – to the untrained eye you might not know the difference just by looking – only a shepherd could separate them.

And the difference in human sheep and goats is shown we are told by the fruit of our actions – by how we treated others. The cold, the thirsty, the stranger, the homeless, the poor, the sick and the in prison.

These are the groups that would have been considered unclean, untouchable and undesirable in the time of Christ – even priests might have walked by on the other side of the road to avoid them as the Parable of the Good Samaritan shows. They are the powerless, the oppressed, the shame filled and the naked – in other words the totally vulnerable.

And Christ the King says that is where we find him; this is how we serve him. For it is with these that our King chooses to live.

But the passage demands something more than just charity or distant love – it says that if want to get close to God – then we have to get close to those most in need – and like the Kings who came the stable – that might require quite a journey for some of us leading to a very unexpected destination.

But Christ the King in the world today – is found in similar places. In refugees and the poor; in prisoners and addicts; in slums and in stables as well as high rise flats and cardboard cities.

And it has always been the same.

One of my favourite quotes from the Desert Fathers is – if you cannot find Christ in the beggar at the church door, you will not find him in the chalice.

The King is always there with those we least notice.

When Jesus first came few people noticed. The innkeeper didn’t really notice, the market traders and religious leaders didn’t notice….all the other people there for the census didn’t notice. Only a few shepherds, prompted by angels, noticed on that first night – and stopped and praised God. And later the three Kings – better named the Magi – noticed a star – and then there was the old man and old woman at the Temple – who knew they held the light of the world – the Messiah – God’s chosen King even as others changed money and went to offer their sacrifice unaware of what they were passing. But it has always been the few who have truly seen Christ.

So the call of Christ the King is to be one of the few who notices – and who remembers that true leadership – true Kingship always looks barefoot, broken and cruciform like Christ – but in that is the gift and blessing of eternal life.