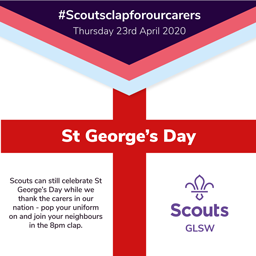 How to Fight a Dragon when you are stuck inside.

Today is a special day for the Scouting movement – St George’s Day.

And normally I would put on a very odd mask – or dress up – or make you dress up – and we would all be together – and we would laugh – and tell stories of fighting dragons and renew our vows to play our part in fighting for good in the world.

This year we are at home – but that doesn’t mean we can’t tell the stories – and make our vows again.

Do you remember how the story goes?

Once upon a time lived a man called George – who was brave and heroic – muscular and good looking…(you might remember last year we picked a girl to play St George! Remember heroes are all shapes and sizes – and all genders too!)

One day a messenger came to George in deep distress – saying that the Kingdom was being ravaged by a terrible fire breathing dragon. This ferocious beast was demanding beautiful maidens to eat and the gorgeous princess was at the this very moment being chained up and taken off to become the dragon’s dinner.

Pulling on his helmet and seizing his sword – he leapt upon his horse and charged off to do battle with the vile monster. Arriving in the nick of time, as the languishing princess was about to be gobbled up.

George heroically battled with the dragon, killed it and rescued the princess – who no doubt fell madly in love with him and they all lived happily ever after.

Or at least the legend goes…

Of course nobody really knows who the real St George was – some say he was born in Turkey, in the third century AD and that his parents were Christians. He may have become a Roman soldier – and legend has it that he spoke out against the way the Roman Empire persecuted Christians. For this he was imprisoned and tortured but stayed true to his faith until he was beheaded for believing.

The two stories are very different: the dragon one is far more exciting. But both have the same theme: a hero who knew they must do they could so that others would not suffer.

Right now we have a global dragon to slay – COVID19. And we need an army of sofa heroes to make that happen. Families who are prepared to stay home to help save lives. We also have heroes like George going out to fight the dragon on the frontline – the doctors and nurses – the paramedics and all the key workers – from waste collectors and shop staff to cleaners and teachers. And they need the sofa army to pray for them – to raise money and support them – to paint rainbows to encourage them – and on Thursdays – like today – to clap for them. If you are staying home clap for yourself too – this St Georges Day we all get to be a hero if we are brave enough to put others first.

And to help us resolve to do that not just today but every day – just after the clapping we will renew our vows – promising to do our best to help other people – to serve God, however we understand God, until we defeat every dragon of this world which causes the suffering of others.

We can do it – we can all be St George this year – are you ready to help the fight?