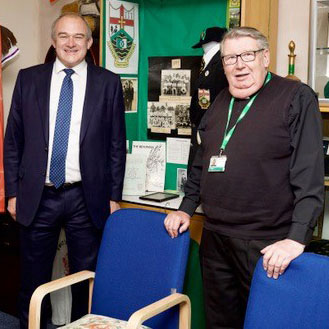 The Cancer Information Suite at Coombe Boys closed in May this year. Father Clive writes about the suite and Sir Ed Davy’s visit to mark its closure.

Rev. Clive Piggott has been a long standing member of our community and has been a volunteer for Macmillan Cancer Support since 1964. In 2019 Fr. Clive also celebrated 50 years of ‘ministry’ in New Malden to the School and Saint James Church. Since 1973 there has been a Cancer Information desk/Suite on the school site where he has offered counselling about Cancer services available to the public and since 1996 bereavement counselling and funeral preparations and offering his services to conduct the funeral. Also weddings and baptisms for former students.

In 1973,the then Headmaster, Mr. Clifford Fisher chose Cancer Relief (now Macmillan) as Beverley School’s main charity. Fundraising initiatives supported by the School included a yearly sponsored walk around Richmond Park and various social events in the school grounds and the local St.James Church hall. In the early 1970’s Clive became chairman of the Committee and since 1978 all the Committee were parents of Beverley students. A dedicated meeting room was established in the school. Social events continued to raise money for Macmillan with support from many outside bodies. On 1974 we established the Friends of Malden Cancer Relief which had over 100 supporters and they along with school parents and members of Saint James congregation were invited to the many socials. Senior students were actively involved in all these events and included girls from Coombe Girls School.

In 2010 a brand new Cancer Suite was opened just inside the main school gate as laid out in the plans for that period school rebuild which was open every Thursday from 9.30am – 2.45pm and meetings offered at other times by appointment. We wanted the Suite to be as comfortable as possible without the word ‘cancer’ everywhere and so we had many artefacts from the time Clive was Head of Religious Education at the School from 1969-2005 and these grew as people made very generous donations…. and their names are still listed. Macmillan has informed us that since 1975-2021 we have raised well over £300,000 for the charity and since it was founded in 1963 it is estimated to be about £400,000 as we had a shop in New Malden High Street. Money was also raised for St.James and the School at various functions. In 1996 Clive was Ordained as a priest and so this added to the services that could be offered. All the Committee members have received President Medals with Clive, his mother and the Secretary from Her Royal Highness The Duchess of Kent.

We are grateful for all the support that we have received in bringing help to our Community and he is in touch with many former pupils and their parents to this day.There has always been a strong link between StJames Church,the School and Macmillan and many of you will have memories of events staged.

In May Sir Edward Davey who has been at the opening of three of the Cancer Information places came to officially close the Suite. In the last year it was open in 2019 had 120 footfalls on the Thursdays alone but of course the Covid Pandemic stopped all that. Macmillan and the School have held many services in Saint James’ Church over the years since 1969 and hopefully this connection will continue.

Fr.Clive would like to end by saying ‘it’s a privilege to work with so many wonderful people and establish lasting friendships. But most important all these people have helped hundreds of Cancer Sufferers and their families. All the present committee, bar one, has given over 45 years service but sadly now ageing and so we shall disband the Malden and Coombe Committee in 2023 it’s 60th Anniversary. The Cancer Suite closed at the end of June 2021 due to a school rebuild and has Macmillan now has several help venues and a phone line it was decided after 48 years to ‘call it a day’ and so the day has come to retire from that area of the Malden and Coombe Committee’s specialist service.

But the School (now Coombe Boys) can be very proud of all that it did to help so many and may possibly be unique in the country for its support to this charity and the parishioners of Saint James of their input in helping such a worthy cause.

Regards to you all