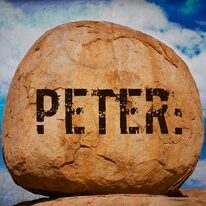 Today we have a reflection or thought for the day rather than a sermon – as I’ve been off this week – taking a much needed rest!

And it is all about Peter.

Who is the “rock” on which Jesus says he will build his church – a kind of super apostle – or the ultimate pastor or priest.

If you were God I wonder who you would chosen to have that role? Because Peter isn’t an obvious choice…

And he has an impressive list of failures and mistakes to his name too.

Peter doesn’t always seem to understand situations very well: foolishly trying to build tabernacles at the Transfiguration and on another occasion (thinking he was saying the right thing) he tried to argue Jesus out of his destiny – and Jesus has to say “Get behind me Satan!” Not what you expect the Head of the Church to be called!!

He was the disciple who had all the bravado to walk on water –but also enough doubt to began to sink and enough despair to cry for help.

When asked to pray for Christ – in his hour of greatest need before his arrest – Peter falls asleep.

When the guards turn up – possibly feeling a bit guilty for falling sleeping – Peter completely loses his temper and cuts off a guard’s ear. Jesus has to mend it.

That’s Peter. Peter, the rock on whom Christ will build his church.

Some might find that confusing; I personally find it encouraging.

It means God can use anyone to build his church. It means Peter passes the baton to build the church on to us all.

And Peter grew up from those early mistakes.

Eventually he fully accepted his call and boldly lived it. They say as he was lead to be crucified at the end of his life – he asked to be excuted upside down – feeling unworthy to die the same death as his Lord.

But it took a while – it was a journey of becoming – not an easy and instant sainthood.

Just as it is for us all.

There are no pop up saints – it is a slow build.

We are slowly formed into who we are called to be.

“you are also like living stones, being built into a spiritual house to be a holy priesthood, offering spiritual sacrifices acceptable to God through Jesus Christ……you are a chosen people, a royal priesthood, a holy nation, a people belonging to God, that you may declare the praises of him who called you out of darkness into his wonderful light.”

Spiritual houses take time to build – and it takes time and effort and dedication and love to make them so.

So my message this morning is simple – we are all a work in progress – our life as church was started with a work in progress too – thanks be for Peter. So, in memory of him, let’s be gentle and encouraging to each other as we follow his call in our own time and lives and formed into all he wants of us.

And let’s commit to the journey of becoming – to growing into all we can be. Knowing it will take time, dedication, sacrifice and effort to get us there.